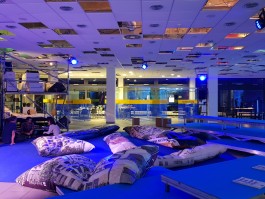 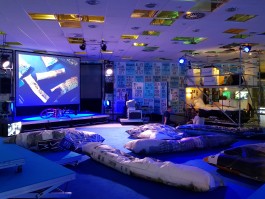 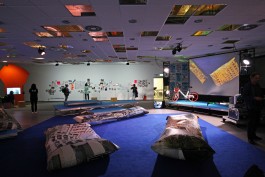 Spatial concept for a temporary project space in a former post bank office, as a part of the festival “Berlin Bleibt” organised by Hebbel am Ufer Theater. The week-long festival and exhibition served as a platform to discuss questions of gentrification and city politics through various formats such as public debates, film screenings, interactive art installations and music performances.

Built in the 1960s, the iconic Postbank building interior follows a standardized design that is generic and interchangeable with many other commercial office buildings around the world. It is now awaiting renovation, while being used for culture/media production and storage space in the mean time. The spatial concept underlines this temporary status of the space and lets the different layers, the building‘s past as post and bank office and the present use as an event location and speculation site, co-exist. A central carpeted stage area with flexible seating accomodates the various event formats and is a social area during the day. A large-scale light installation in the ceiling breaks the monotony of the ceiling panel grid and exposes the underlying infrastructure. A scaffold the size of a miniapartment is both an installation and stage, and the glass cubicles contain interactive art installations. The history and future plans of the building and surrounding area is displayed as scrolling text on LED displays. Advertising signs from a closed kiosk nearby light up the bar. 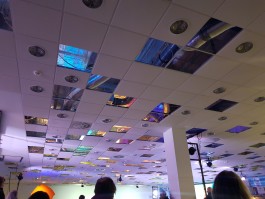 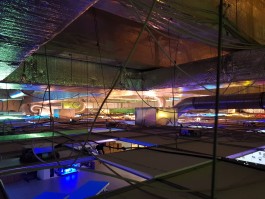 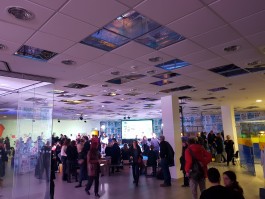 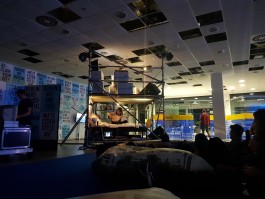 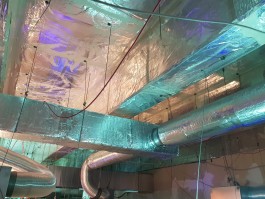